My Canadian nephew Daniel recently stayed with me in Mürren Switzerland for 12 nights. It was his fifth visit, as he first stayed with us when he was 9, again at 18 not long before we climbed Kilamanjaro with our daughter Lisa. He returned again when he was 23 and 29. I think we worked out he had spent almost two months in Mürren, although his father and my brother-in-law Wayne has yet to make a visit!

During his visit, as I will be for much of the next two years, I was  researching and writing a hiking guide to Mürren and the Lauterbrunnen Valley with some 57 hikes to complete this year and next.  Daniel was a great and patient companion as we completed 5 long hikes together. He suggested it might also be nice to hike in a different area of Switzerland and I decided we would go down to Zermatt and hike to the Schönbiel Hut via the famous Höhbalmen Route.

The Höhbalmen is one of the great Balcony routes in the Alps, contouring around high above the Zmut Valley with neverending and uninterrupted views looking across at the Matterhorn (4478m), surely the most distinctive shaped mountain in the Alps and one of course that has played a pivotal role in mountaineering history. In 2000 together with several friends we had climbed up to Trift and then contoured around before descending and then ascending to the famous Schönbiel Hut and we did this in a single day. This year we did not arrive at Zermatt until 2pm and were quite content to just hike up the steep 700 metres to the legendary Trift Mountain Inn where we slept the first night.

The following day we made our way to the Schönbiel Hut and for most of the day it was a glorious blue sky day. I had forgotten just how magnificent the scenery was on the Höhbalmen with extensive views in every direction and it felt a true privilege to walking amidst such spectacular scenery with multiple 4000m peaks adorning the views in every direction in addition to the Matterhorn which was constantly at our side. I was so pleased we had chosen a day when Daniel was able to appreciate so many fantastic views. These famous peaks included much of the Pennine Alps, the Monte Rosa group and the Dufourspitze (the highest peak in the Swiss Alps at 4634m), the Breithorn (4076m) which I hesitate to say I climbed in 1995 as walking up is amore accurate description!,  Castor (4223m), Pollux (4092m) and Liskamm (4527m), the Dent d’Herens (4171m)  and the Ober Gabelhorn (4063m).

The Schönbiel Hut is the last stop on the famous Haute Route from Chamonix or Argentiere and Mt Blanc  to Zermatt and the Matterhorn and I had made my first visit to the Schönbiel Hut in 1995 when, on the final day of the Haute Route, I had walked  from the famous Bertol Hut, ascended the Tete Blanc and then clambered across the glacier to arrive at the Schönbiel Hut, only to discover our guide planned to continue another 12 km and reach Zermatt the same day! I was exhausted by the time we arrived at Zermatt but still in 1995 managed the 12km between the Schönbiel Hut and Zermatt much quicker than I did this year! My excuse is that an apparent diversion in the last 19 years had made the distance longer!

Indeed over the three days I was interested to note that on some sections of the trail I was able to almost match (my seemingly fast) times from 19 years ago but on other legs I was significantly slower. I guess there is an easy explanation and its called…………….’getting older’. Daniel was very good as  although we were both happy to hike and catch up with podcasts as we walked , he would frequently take a break and wait for me to catch up and ensure that I was still chugging along and had come to no harm!

On our final day, as we made the long walk back to Zermatt via Zmut, above us we could see the Matterhorn’s entire Hornli Ridge in all its glory with the Hornli Hut at its base clearly visible. I had hiked to the Hornli Hut with my Filipino friends Ted and Tess and Thai friend Ampai  in 2016 on my last visit to Zermatt.

I am not a big fan of Zermatt, which has not been a village for many years. It is a town full of many brand affiliated stores unashamedly directing their wares at the train loads of now primarily Asian visitors who arrive every day and it just happens to be located in the Mattertal (Valley). For many Asian visitors it is a case of ‘any famous brand is better than no brand’ so Zermatt is well suited for their shopping needs as well as an excellent  base for visiting some magnificent mountain scenery.

Indeed although one can see very few of the famous peaks surrounding Zermatt from the village  itself, there is an almost incomparable range of mountain scenery within easy access and without much effort using cable cars and mountain railways from the town.

Whether you choose to follow the Höhbalmen route to the Schönbiel hut in two days or three, which I would recommend  as it gives you time to explore the landscape around Trift on the less visited western slopes above Zermatt, it is a hike well worth undertaking as the following images will I hope, convey.

The Höhbalmen and the Matterhorn (4478m): August 14 2019 – the trail contours around providing never ending views of the Matterhorn and is one of the great Balcony routes in the Alps. 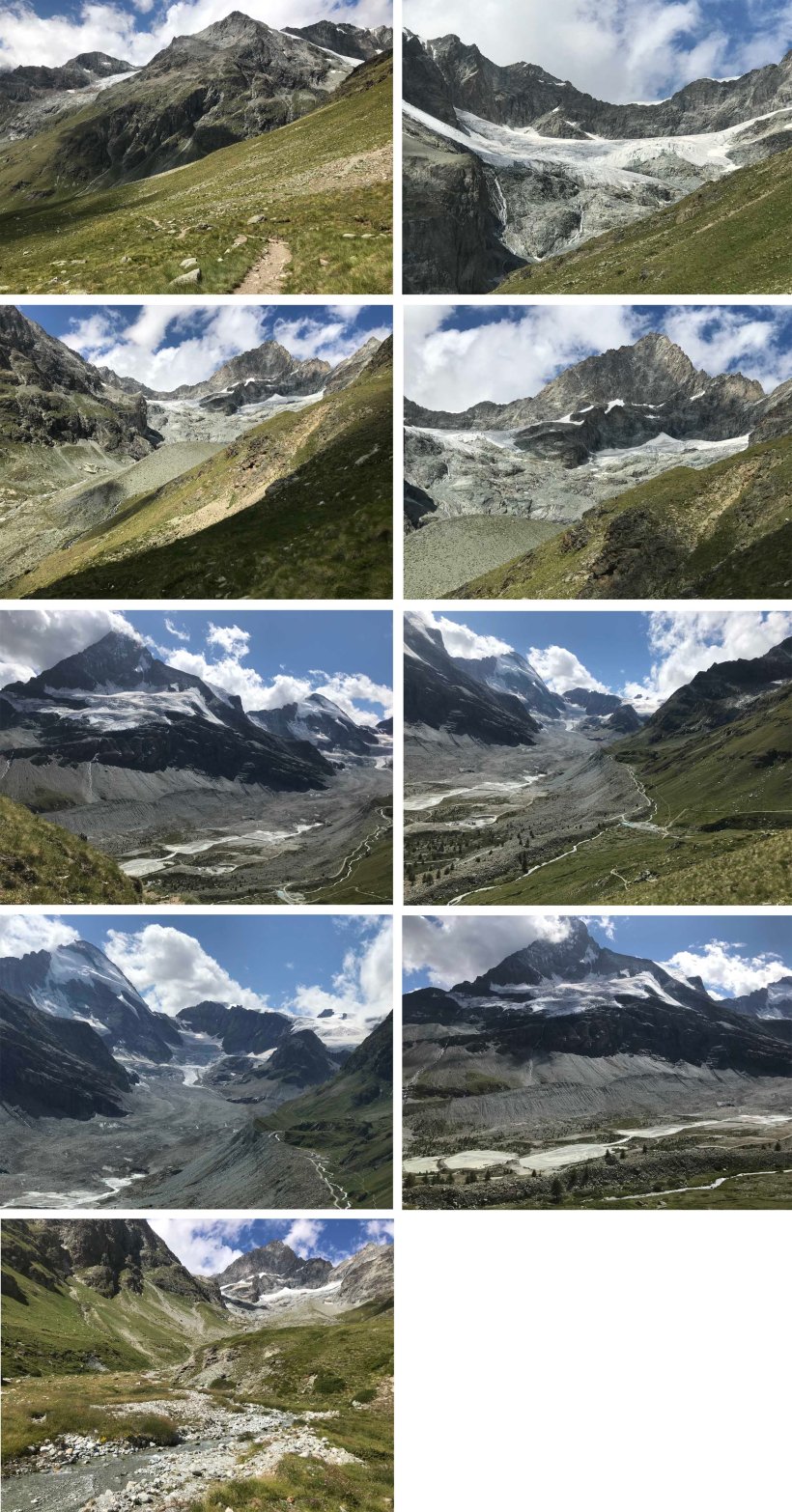