I have a lot of time for the country of Vietnam. It is one of those nations like New Zealand, France and the USA which appears to have a never ending list of varied attractions, both Cultural and Natural to visit and admire.

I have previously visited  the south of Vietnam and explored Ho Chi Minh City and its surrounds and cycled across the Mekong Delta and three years ago I spent an exhilarating 10 days in Northern Vietnam, enjoying Hanoi, the most Asian of cities as well as  Halong Bay, Sapa, the colourful Market at Bac Ha and the magical mountain landscapes adjacent to the Chinese border, before we arrived at tranquil and spectacular Ba Be National Park.

So it was with a degree of anticipation, when in March I visited Central Vietnam, for many visitors their favourite part of the country.

I was not disappointed, for as well as travelling with my brother-in-law Wayne, I also met up with our daughter Lisa (enjoying a belated ‘gap’ trip after finally submitting her PhD and before getting married) and my Vietnamese Tour Operator friend Ngoc and we visited a host of fascinating attractions.

We started off at the famed Marble Mountains just outside of Da Nang before following the spectacular road north over the Hai Van Pass to the former capital of HTue which did not disappoint.

The Old Imperial City inside the Citadel appeared bigger than the Forbidden City in Beijing and to me was more impressive. And there were a number of varied and impressive Royal Tombs in the nearby areas surrounding Hanoi that we also enjoyed visiting.

We explored many of the relics and battle sites from the Vietnam War as we passed through the former DMZ zone, when we headed north from Hue to visit three magnificent Caves at Phong Na. I have visited many impressive caves around the world but Paradise Cave was indeed something else in both scale and stature, extending inwards and underground for some 26 kilometres. The formations tastefully illuminated in the kilometre that most visitors can explore were impressive in the extreme.

After returning to Hue for some further explorations, we continued southwards to Hoi An, for many their favourite destination in Vietnam. En route we stopped at Ba Ha Hills – a Fantasy Park built at higher and cooler elevations on the site of a former French Hill Resort and at the end of one of the world’s longest cable cars. If you imagine the Loire Valley Chateaux and a French Provincial town meeting Disneyland in the Vietnamese Highlands you will get the general idea! 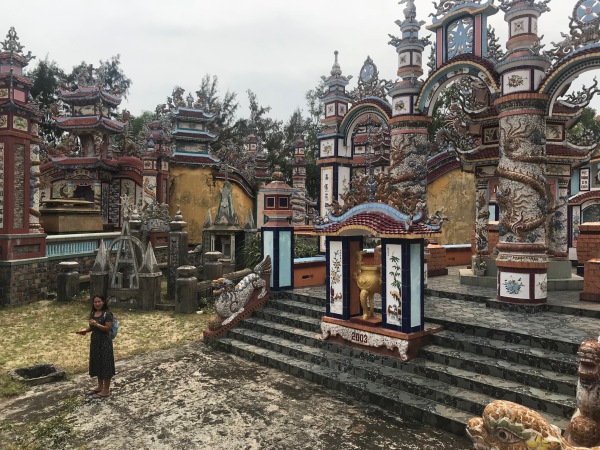 Hoi An, with its  pedestrianised Old Town is undoubtedly better preserved than any other historic town in South East Asia and beautifully lit by a myriad of colourful lanterns at night. Hoi An is also justifiably famed as the culinary capital of Vietnam but, be warned, there will be no shortage of Korean and Chinese Tour groups when you visit. I think Hue, far more of a working city, was more to my taste.

We also had time to make a half day visit to the ancient Cham ruins at My Son and it would be difficult to have packed any more into what was a really busy and enjoyable visit to Central Vietnam, together with the added advantage of some good company.

However, one location or ‘attraction’ impressed me more than anything else.  I just could not conceive what I was seeing and kept saying over and over – basically to myself and brother-in-law Wayne –

‘I really don’t believe this’

What was it that so impressed me? 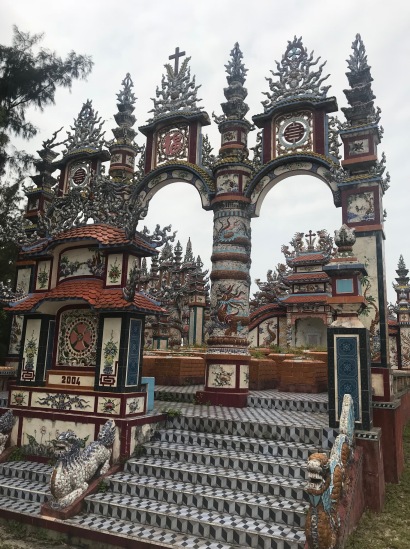 It was the ‘City of Tombs’, a vast (and I mean vast!) cemetery about 15 kilometres south of Hue, to which I saw a brief footnote or reference in one of my guidebooks.

Hue is justifiably famous for the series of decorative and impressive Royal Mausoleums surrounding the city and indeed we visited three of the most famous.

But this was something quite different from anything I have ever seen with a never ending succession of giant Vaults, Mausoleums and Tombs filling the landscape for as far as one could see in every direction.

Most of these Vaults were built to accommodate the remains of multiple family members and were contained within highly decorated compounds the size of a four or 5 bedroom suburban ranch(!). There were hundreds of these structures adorned with suns, moons, dragons and crosses (this was clearly an interdenominational cemetery!) stretching in a cacophony of colour to the horizon and in every direction.

It may not always have been aesthetically attractive, with one giant mausoleum in blue butting up against another with a preponderance of green, but the sheer scale of what was on offer was almost overpowering!

I have visited some of the world’s most famous resting places, including Highgate Cemetery in London, Pere Lachaise in Paris, the War graves in Normandy and Thailand, but I had never ever seen anything quite like this.

We all know the feeling of being disappointed when we finally get to see an attraction or location that we have dreamt of seeing for years or decades and being really impressed, when we see something when, by contrast, our expectations are low. In 1972,  I was impressed when, after months of travelling, I finally  laid my eyes on the Taj Mahal for the first time, but it was nothing in comparison with the excitement I felt when viewing the spectacular temples at Khajaraho, about which I previously knew nothing! Indeed, they impressed me more than anything else on my first trip through Asia, but perhaps because I had no expectations that could be disappointed?

So I accept that part of the fascination with what I saw at An Bang was because I had zero expectations, but this bizarre and colourful collection of spectacular and even gaudy constructions, all laid out as far as the eye could see with no thoughts about symmetry, was quite unlike anything I had ever seen. Think of the Tiger Balm Gardens in Singapore, but on a much bigger scale, and with buildings, not statues and figures!

This was so unexpected and so different that I was thinking it was deserving to be listed as one of the leading man made attractions in South East Asia, up there with Angkor Wat in Cambodia and the Gardens by the Bay in Singapore. That tells you how impressed I was!

But that was not all!

The area covered by these impressive structures had to be, at the very least, a dozen square kilometres and I was forever taking more pictures as I passed around one family tomb to discover three vast structures around the next corner.

And so it continued. 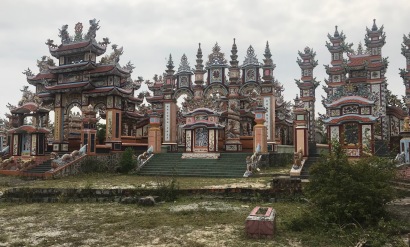 My mind just could not grasp the scale of expenditure involved and the work for the artists and architects responsible for each structure and edifice, but that was not all that impressed me.

In 90 minutes of wandering and a thousand utterances of

‘This is unbelievable – I just don’t believe this’

perhaps what impressed me the most was that, other than the three of us (and our taxi driver), for the first 70 minutes, I did not see a single other human being.

I felt if I was wandering through a vast deserted city in India or perhaps an empty film set in Hollywood and finally, after about an hour, we happened across five labourers doing some maintenance work on one of the Tombs! 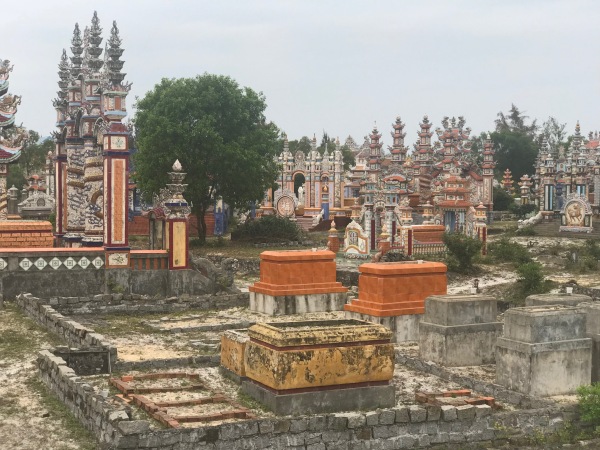 There were thousands of graves but not a single visitor paying respects to departed family members.

There was one of the greatest collection of crazy, colourful structures and buildings I have ever seen and not a single inquisitive tourist? There were far more tourists visiting an abandoned water park in Hue which has developed a cult interest amongst backpackers.

It’s a hackneyed phrase but I was indeed gobsmacked and in truth could have stayed there all day, progressing from one vault to another and wondering about the stories behind each.

And it transpired all of this was of relatively recent origin.

At the end of the Vietnam war many families from the nearby village of An Bang emigrated to the USA and, as they prospered, remitted funds to family members and relatives who remained in Vietnam and that was the source of the funding for this incredible (and I use this word accurately) collection of buildings, which is indeed a City of Tombs – and I explored just a fraction of a landscape covered by tombs, vaults and mausoleums in every direction.

Did every successful emigrant from Vietnam come from An Bang?

Why have other villages providing emigrants to the USA not done the same, as it appears clear to me that, of the all the nations in South East Asia, it is perhaps the Vietnamese who are the most  hard working and entrepreneurial.

And why were there no other visitors?

I understand the Vietnamese honour their loved ones not on the day of their passing, but on a specified ancestral day – the rest of the year An Bang is indeed a deserted city of the dead!

There is a lot to see in Vietnam, but in five visits to date this is the single destination  that quite literally took the words out of my mouth over and over again:

‘I have never seen anything like this. This is unbelievable!’

And if this website’s brief is to be a home for articles about Remarkable People, Memorable Events and Fascinating Destinations, then the City of Tombs at An Bang  is more than worthy of inclusion.

Enjoy the images below and you will see why I was so impressed.